Ryan Miller came to Columbus from Allen Park, MI. He played football for The Ohio State University from 1993-1996, where he started at outside linebacker and helped the team capture a victory in the 1997 Rose Bowl. The two-time Iron-Man Award winner was also selected as the co-Defensive Player of the Year as a senior for the Buckeyes.

After graduating with an Economics degree from The Ohio State University, Ryan began a career in sports journalism with "Sports Radio 97.1 The Fan" (WBNS).

From 1997 to 2000, he co-hosted a morning drive talk show called Miller and Mark in the Morning. During that same time period, he teamed up with former Buckeye and NFL great Jim Lachey for the weekly Ohio Sports Insider program, which aired on the Ohio News Network.

Ryan then joined WBNS 10TV in September 2000 as a Sports Reporter. He took his passion for sports to the weekly magazine show, Wall to Wall Sports, as an anchor.

In 2002, Ryan won two Sports Emmys for Best Sports Reporter and Best Feature Story while getting accepted to graduate school at The Ohio State University.

Ryan is involved in many charities in central Ohio. He is the co-founder of The 2nd & 7 Foundation – whose mission is to “Tackle Illiteracy.” Miller and former Buckeye teammates Mike Vrabel and Luke Fickell started the foundation in 1999 and have read and donated over 300,000 books the past 20 years with help from The Ohio State University Department of Athletics and over 150 other Universities and High Schools throughout the country. In 2008, The 2nd & 7 Foundation began writing their own series of children’s books as their lead characters, The Hog Mollies, provide inspirational themes that children can take away while reading these fun books. Each year, The 2nd & 7 Foundation writes and publishes a new book. They currently released their new title for the 2019-20 school year – The Hog Mollies and the Little Lilly’s Legacy which provides a message about leadership. Please visit www.secondandseven.com for more information.

Ryan enjoys reading, running, and spending time with his family. He currently lives in the Columbus, Ohio area with his wife Lauren and their three children; Nolan, Eli, and Quincy.

Megan McCabe came to Columbus from Cincinnati, OH. She played basketball for The Ohio State University from 1997-1999 and went on to work with General Electric Medical Systems and Procter & Gamble during her summers in college to gain valuable work experience for her career.

After graduating with a Computer Science and Engineering degree from The Ohio State University, Megan began her career with Mettler Toledo in their ICE (Initial Career Experience) program. As part of the ICE program, she spent time in 4 different rotations (industrial marketing, retail marketing, software development, and HR) over 1.5 years. After the ICE program, she joined the Industrial Marketing team, became the inside sales team leader, and went back to Ohio State in the evenings in an effort to expand her career options.

In June, 2005, Megan earned her Masters degree from the Fisher College of Business (OSU) and during her time in the MBA program, founded m2 marketing, LLC with former OSU Football Player, Ryan Miller. M2 currently provides web solutions and graphic design services to businesses across the country.

Like her business partner, community service is also important to Megan. While starting her career with Metter Toledo, she started a program called ICE COLD (Community Oriented Leadership Development) to encourage current and former ICE members to give back. She has since served on the board of The 2nd & 7 Foundation, continues to help write books for the foundation, and encourages her kids and employees to find ways to pay it forward as well.

Megan enjoys coaching youth sports, skiing/snowboarding, triathlons, drawing, and spending time with her family. She currently lives in Lewis Center with her wife Heather and their two boys Ethan & Brady.

Whether it's enhancing their online presence or creating internal efficiencies, we aim to have clients experience the "WOW!" factor when working with m2.

Working with happy clients since 2004 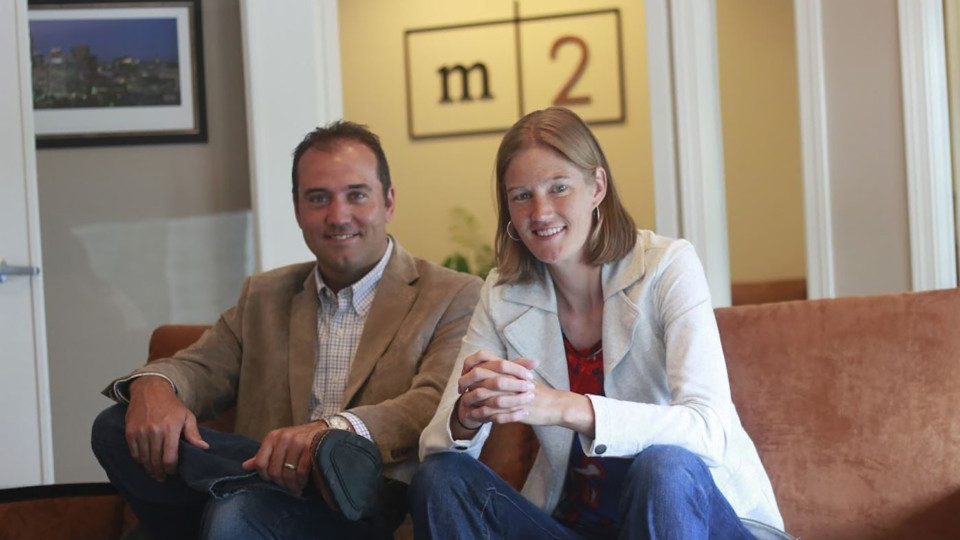 We've carefully constructed our team by building from the ground up and focusing on two main priorities: 1) the skillsets needed to provide our core services and 2) the customer service and responsiveness our clients expect and deserve.

Our diversified experience in different industries helps us bring best practices found in other markets to the forefront for our clients.